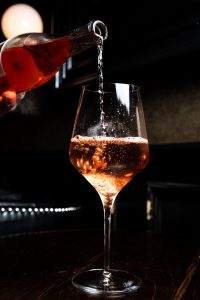 In order to overcome the limitations of the prior art, according to a first aspect of the invention, a method has been developed capable of providing a rapid and precise evaluation of the ethanol content of hydroalcoholic solutions, including commercial beverages, by measuring the alcohol concentration in a corresponding vapor phase.

According to another aspect of the invention, the proposed method has been reproduced in practice thanks to a specially designed device, suitable to be used for the determination of the alcohol content of solutions and beverages of any strength.

In the method of the invention, the solution to be analyzed is first diluted with water in the liquid phase, so as to minimize the partial pressure of the volatile organic compounds in the corresponding vapor phase. The resulting vapor phase can then be sucked in by means of a device, such as a vacuum pump, and sent to a device capable of mixing this stream with air, such as a venturi injector. The alcohol-enriched air mixture can thus be sent to gas sensors for ethanol analysis, such as semiconductor sensors, to then be discharged into the environment.

The dilution of the vapor phase with air has the advantages of bringing the alcohol content back into the measurement range of commercially available gas sensors and limiting the influence of the humidity of the current to be analyzed on the sensor response. By alternating loading phases, in which the air current is mixed with alcohol vapors, and cleaning phases, in which the air current is sent pure, and possibly heated, to the sensors, it is possible to alternate measurement stages with regeneration stages. sensors, if needed.

Through the use of a calculation module equipped with analog and / or digital pins for output and input communications, such as a single board microcontroller and appropriate circuitry, it is possible to modulate the inlet air flow and the mixing ratio, and analyze the response of the sensors so as to be able to quantify the concentration of alcohol present in the gaseous phase. The sensor response can be correlated to the alcohol concentration in the gas phase through calibration curves constructed from the analysis of solutions whose liquid phase has a known alcoholic concentration and whose concentration of ethanol in the vapor phase has been obtained by means of thermodynamic models and / or by means of known semi-empirical models.

Therefore, for the analysis of a sample of unknown title, the sensor response is linked to the concentration in the gas phase, and then, by means of thermodynamic and / or semi-empirical models already mentioned, it is possible to calculate the unknown ethanol concentration in the liquid phase. In this way, the effect of volatile organic compounds is canceled, the effect of temperature is taken into account (through pure thermodynamic calculation or through the use of semi-empirical equations) and avoids having to dehumidify the current sent to the sensors.

For more information, you can obtain the patent at the following link. 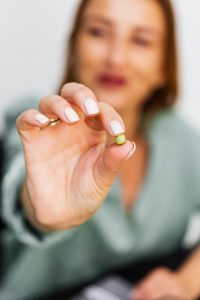 In order to improve conventional drug release and dissolution tests, according to the present invention, a method and a device capable of simulating, reproducing them faithfully, the pH variations that occur over time in the gastric environment have been developed. represented by a buffer solution, used to test pharmaceutical dosage units for oral use.

The proposed method makes use of the use of two simple solutions (acid and base), compatible with the rules of the pharmacopoeia, and the use of a stand-alone device capable of controlling the pH of the solution in feedback. Specifically, in the proposed method the dissolution medium is represented by the common saline solutions suggested by the various pharmacopoeias, such as PBS – Phospate Buffer Saline.

Thanks to the dosage of two solutions, one acidic and one basic, and by means of a feedback control based on the pH value measured by a probe, it is possible to simulate in vitro pH histories similar to those recorded in vivo, both with decreasing pH and increasing, thus being able to obtain release data of active ingredients more similar to the real ones. The device takes a basic or acid solution from two different tanks, for example peristaltic, to correct the pH following a reference value (set point) that varies over time. Non-limiting examples of such solutions can be distilled water and sodium hydroxide, and distilled water and hydrochloric acid.

The proposed device, in addition to the verification and feedback control of the pH of the aforementioned solution, allows accurate monitoring, instant by instant, of the volumes involved, thanks to an innovative system for determining the flow rate of the dosing pumps (for example peristaltic) which allows you to avoid adding flow meters to the device.

In light of the current limitations of in vitro tests, the present invention therefore confers greater veracity to said tests, guaranteeing the simulation of pH histories comparable to those that are carried out in vivo.

For more information, you can obtain the patent at the following link.